**Update: This post was re-published on Crain’s Business Chicago on September 10, 2018**

Mayor Rahm Emanuel’s announcement on September 4, 2018, that he wouldn’t seek a third term took many in Chicago (myself included) by surprise. His announcement obviously has important implications for the 2019 mayoral election–already announced candidates will likely tweak their campaign messages and more people will likely jump into the race.

While there are lots of campaign issues and outstanding (potential) projects for the current administration, I’m focused on pensions because the City’s most recent estimates have the City’s required pension contributions increasing nearly 30% in 2020*. The chart below shows the City’s actual and estimated pension payments for 2010-2025.** 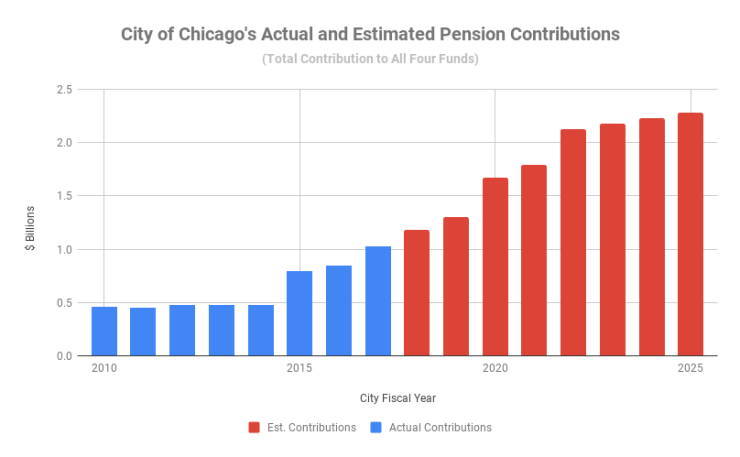 The new mayor will need a plan to make the 2020 payment, as well as the payments in future years. As the chart shows, another big jump in the City’s pension contributions is projected to happen in 2022.

As I see it candidates have three choices: First, they could pledge to cut pensions, thereby reducing pension contributions. But, the Emanuel administration already tried that, and the state supreme court ruled that effort unconstitutional. The other two options are: cutting spending or raising revenue. While many of the already announced candidates haven’t given detailed plans the common themes have been: a) stated commitment to make the payments; b) criticism of increased property taxes (which were increased to make the pension payments); and c) a desire to have a progressive revenue structure. I haven’t seen much discussion on cutting spending. Thus, it seems like most candidates are going with the raising revenue option.

So Why are Pension Contributions a Pressing Issue?

As previously mentioned, the City’s 2020 budget will need to include a way to pay for the nearly 30% increase in required pension contributions. Whoever wins the election will have a tight window to accomplish this task. The winner of the election will take office in May, and will need to introduce his or her 2020 budget proposal by late September/early October. The 2020 budget needs to be finalized before the fiscal year starts on January 1, 2020.

So if the new mayor wants to overhaul the City’s tax structure to pay the pension contributions he or she will need to do that within the first eight months in office. This would be a heavy lift as it’d require both getting new laws passed and implementing the taxes. Cook County’s sweetened beverage tax started being collected nearly nine months after the Board of Commissioners approved the ordinance authorizing that tax, and even then there were issues with that tax’s rollout (it was quickly repealed).

Candidates campaigning on changing Chicago’s revenue structure should be pushed to address how feasible their proposals are for crafting the 2020 budget. For example, does the new tax they’re eyeing–like a City income tax or a financial transaction tax–require action by state lawmakers? If so then the outcome of the governor’s race will be vital to whether or not their ideas are realistic.

Moreover, some proposals may simply be impossible to implement in time for the 2020 budget. A progressive income tax, for example, would require a change in the state’s constitution–a process that takes several years and requires voter approval (in addition to passage by the General Assembly). The earliest that voters could even vote on such a measure is November 2020. In other words, even *if* a progressive tax is politically possible, that revenue is unlikely to be available in time for the City’s 2020 pension contributions.

The property tax is an obvious revenue choice because the City sets the amount it wants to collect (called the “levy”) each year. The property tax is distinct from sales and income taxes in which lawmakers set the rates and typically don’t do annual rate changes. While the City’s property tax levy can be increased, doing so is politically challenging. Raising taxes is almost always politically unpopular, but raising the City’s property tax levy is likely to be especially unpopular because doing so will compound the impact that some property owners will see from increases in assessed values.

Individual property owners property tax bills are impacted by the levies that taxing districts set and the value of their property. Because those two things impact an individual’s tax bills, a property owner can see a tax increase even if taxing districts are collecting the same amount of money. Chicago property owners are likely to see big changes to their assessed values when Fritz Kaegi takes office as Cook County Assessor. Kaegi is all but assured to win in November, and a central part of his campaign against the current assessor (who Kaegi defeated in the primary) was a pledge to replace the current assessment system with a new, fair one. Correcting the currently flawed assessment system is going to mean some people will see big property tax increases (others, however, will see decreases).

While Kaegi has yet to take office we’re already getting insight into the political challenge of changing assessments. The current assessor, Joe Berrios, has already implemented a new system that’s impacting some neighborhoods in Chicago. Crain’s Business Chicago had a story in May about homeowners in Lakeview holding a public meeting to discuss jumps in their properties’ assessed values (the median increase for condos was 29% and it was 39% for other residential buildings). Importantly, it’s difficult to disentangle what portion of those increases is attributable to a new model versus Lakeview being a hot real estate market. Regardless of the reason, property owners are already voicing their unhappiness over property tax increases. So while implementation-wise, increasing the City’s property tax levy is the easiest solution it may not be politically viable.

While the City’s future pension contributions is an important topic for the mayoral race, there are a few lingering pension-related items for Mayor Emanuel to address in his final months in office:

* It’s important to note that while the nearly $400 million increase in the City’s contributions in 2020 is significant, it amounts to less than 10% of the City’s total budget.